Personal Profile For The Speaker Of The County Assembly Of Nyeri Hon. John Kaguchia 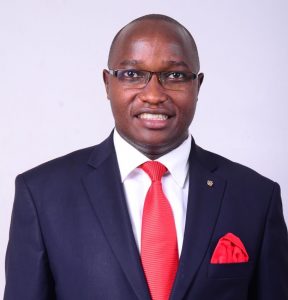 Hon. John Kaguchia is the second Speaker of the County Assembly of Nyeri sworn in on 7th September 2017 after being elected by Members of the County Assembly of Nyeri who voted overwhelmingly for his candidature. Born and brought up in Kiuu Village, Mukurweini Central. He schooled in Githi Primary School, Sat KCPE in 1997 where he was among the best students in Nyeri District securing a position in the limited spaces that were available at Lenana School. He holds a Bachelor of Commerce Degree from Kenyatta University, Masters of Arts in Diplomacy from the University of Nairobi (UoN), Bachelors of Laws (LLB-) from UoN, CPA 2 and other certificate courses in Leadership and Peer Counseling.

The Hon. Speaker has been actively involved in Nyeri County politics particularly in Mukurweini Constituency since 2007 to 2016 where he managed the former MPs Campaigns/politics. He has also been actively involved in national politics mainly on political commentary and analysis. Hon. Kaguchia was motivated to run for the County Assembly Speaker position because he felt that with good educational background especially on governance matters; experience on real ground projects after having been in Constituency Development Fund (CDF) leadership for six (6) years coupled with the above stated qualities and youthful energy, it would enable him to give back to his County which invested so heavily on his education.

As the head of the Legislative Arm, his focus will be on steering approval of legislation that will bring fundamental changes in society to encourage involvement in economic activities to boost social economic growth amongst the residents. He also aims at putting in place policies and structures that will enhance oversight and representation of the Assembly through use of the committee systems which will put the members of the executive to account.

We value your participation.
Find out how you can get involved in propelling our county to new heights.